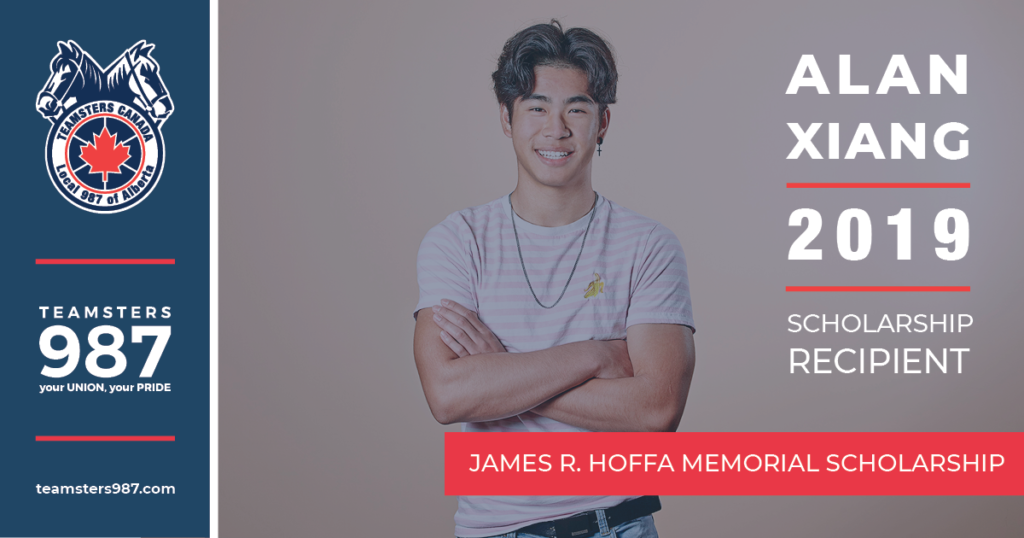 Through our Scholarship Winner Series, we learned about one of our winners, Alan Xiang, who talks about his story as the 2019 James R. Hoffa Memorial Scholarship Fund recipient for the Canadian region. Alan tells us about how he initially heard about the scholarship, the application process, and how the scholarship has had an impact in his life as he prepares for his post-secondary education at the University of Calgary.

Applying for the scholarship was more of a lengthy process than Alan initially anticipated, involving writing a few paragraphs on how Teamsters helped provide their family with opportunities and how Teamsters help advocate for worker rights. Alan still applied for the scholarship as University is very expensive these days, so any money helps. He believes it will help go towards paying his tuition so he will have more time to focus on his studies and doing well, rather than having to work part-time throughout going to school. Watch Alan’s video on the application process here.

To his surprise, Alan won the 2019 James R. Hoffa Memorial Scholarship Fund, and he contributes his success to being a well-rounded student. In taking a partial IB program for math, chemistry and physics, Alan believes he was able to learn at a better pace than the normal program since IB was more competitive and challenging. Not only did Alan have excellent academic grades in his high school’s partial IB program, but he is also very athletic playing a variety of sports including football, rugby, wrestling and martial arts. Alan also volunteers in his community on the weekends, making him an excellent recipient for this scholarship.

Given Alan’s dedication to exercising, sports and maintaining a healthy body he plans to become a chiropractor, starting off by studying kinesiology at the University of Calgary, as they have one of the best kinesiology programs in Canada. Alan is excited about starting his post-secondary education this year but like many students, it won’t quite be the same with all of his classes online, and not being allowed on campus to meet new people. Alan is planning on continuing to play football with the Calgary Colts for now but is excited to try out for the University’s team. Watch Alan’s video on role models and experience here.

Through this scholarship opportunity, Alan thinks it’s important to be well rounded across academics, sports and other activities or volunteering, so you have more to offer and stand out.

Other than celebrities, Alan looks up to his Mother and Father for their work ethic and how they’ve worked hard to provide everything for their family.

Thanks for tuning into our Scholarship Winners Series. To learn more about the Teamsters Scholarship or to apply, visit: https://teamsters987.com/members/987-scholarship-program/