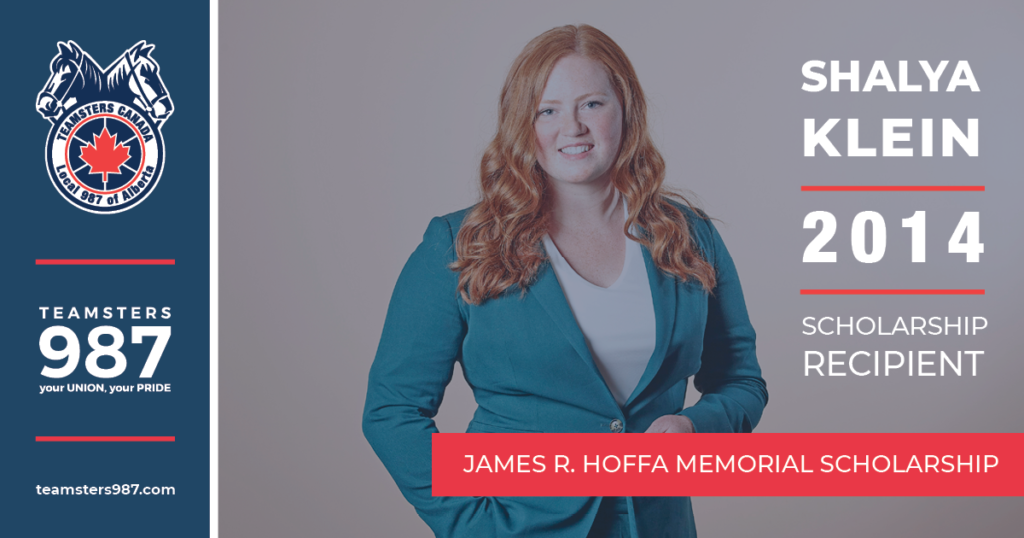 Through our Scholarship Winner Series, we learned about one of our winners, Shayla Klein, who talks about her story as the 2014 James R. Hoffa Memorial Scholarship Fund recipient for the Canadian region. Shayla tells us all about her involvement with Teamsters 987 Union, the application process, how she initially heard about the scholarship, and how the scholarship has had a huge impact in her life.

Shayla first heard about the scholarship through her Dad, who worked at Coca-Cola and was an active Teamsters member. Although the application process was fairly lengthy, Shayla knew there would be a smaller pool of applicants to pick from as the scholarship is only offered to Teamsters members and their families, so there was a greater likelihood of being a top contender. Shayla believes her diversity of experience across academics, sports and extra-curricular activities made her stand out in the application process. She graduated high school with a full IB diploma while being part of the school choir, playing on a national level competitive softball team and working at the Coca-Cola plant with her Dad during the summers. Watch Shayla’s introduction video here.

Even though Shayla ended up staying at home for her post-secondary studies, she was able to study abroad during her undergrad degree. And when she was studying abroad in Australia for the last semester of her undergrad degree, she was thinking about the different master’s degrees she could take. Shayla was attracted to the qualities of doing law, such as the analytical and critical thinking required, in addition to working with people in a dynamic and changing environment. Shayla decided she would take the LSATS as she believed she would be able to make a bigger impact through law and becoming a lawyer. Watch Sayla’s video on the application process here.

During her law studies, Shayla has been focused on keeping her options open, but she is very passionate about employment and labour standards. Shayla realizes that your job/work is a big part of your life and younger people aren’t properly prepared to know their rights as a worker when they enter the workforce. She hopes she can make a positive impact in this area during her career.

Shayla has learned a lot through both the scholarship application process and her post-secondary application/decision-making process. Her advice for high school students (and their parents), is to take your time in deciding what you enjoy taking for your studies. The environment is so different once you’re actually in a post-secondary institution and it’s oftentimes a lot harder to transfer into another major if you’re not doing well. In her experience, Shayla has found that people often do better if they enjoy the material they are studying. If you’re not too sure what you enjoy studying, it’s important to take the time to figure it out first or at least take something that keeps your options open, as it can be harder to backtrack. Watch Shayla’s video on role models and experience here.

There aren’t a lot of Canadian applicants for this scholarship and in Shayla’s experience, you are better off to dig for information on your own as there are many scholarships through parent’s workplaces or other communities and associations. The James R. Hoffa Memorial Scholarship had a huge impact on her ability to graduate her post-secondary studies in law and leave university debt-free, well on her way to achieving her goal of becoming a financially independent woman. Watch the video on Shayla’s advice for applicants here.

Thanks for tuning into our Scholarship Winners Series. To learn more about the Teamsters Scholarship or to apply, visit: https://teamsters987.com/members/987-scholarship-program/