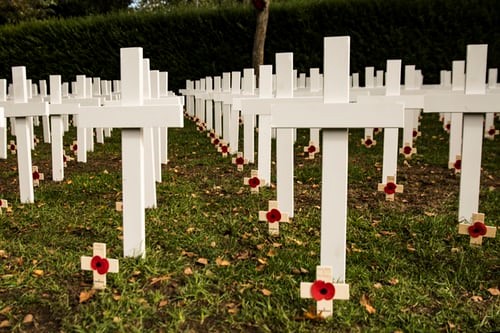 Remembrance Day is marked on November 11th every year to recognize the end of the first world war. World War One ended on 11/11 at 11:00 a.m. in 1918. Every year on November 11 we pay our respects for those who fought and ultimately gave their lives and honour them with a moment of silence. Throughout the war, there were approximately 40 million casualties including anywhere from 15 to 19 million people who died. Some of these casualties were civilians and others were military personnel. To remember those who have fallen, we wear poppies as they were common among the fields where the war took place. Poppies is another common symbol to represent peace among death.

Every year it is important to reminisce and not forget what had taken place. Many countries were involved and all suffered massive loss. We must sympathize with everyone effected on and off the battlefield. There were not nearly enough volunteers to join the army in 1917. Canada entered the war with a shortage of soldiers. In desperation to have a full army, Canada was forced into the use of conscription. All single men aged 18-51 were required to serve in the war. These men did not have a choice but rather, were forced to leave their families as it was their duty to serve Canada. Many young Canadian men lost their lives in the battles and it is our responsibility as Canadians to remember those who fought on behalf of the country and paid the ultimate price. Remember to wear your poppies and donate to the Royal Canadian Legion.

During World War One Canada – a colony of Britain—fought under the command of Britain. Canada gave everything it could, including 8% of its total population to serve in uniform. Ultimately, Canada lost 65,000 and 170,000 wounded. Remembrance Day is about giving thanks for our safety in Canada and remembering those who passed away as well as those who have had life altering injuries. Every person that went to fight on Canada’s behalf put themselves in danger for the greater good.

November 11 at 11:00 a.m. please take a moment of silence to pay respects to those who have paid the ultimate price in order for todays generation to live the way we do.