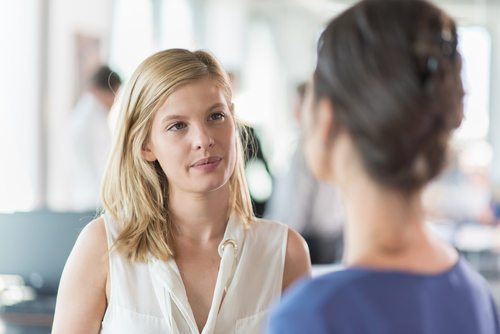 There are several reasons why you may need to call out a coworker. Perhaps they said something offensive, did something to create a hostile work environment, or maybe they unintentionally made a mistake. Whatever the reason, confronting a colleague can be awkward, and can often lead to further tension in the workplace, but it doesn’t have to be this way. Here are some tips for respectfully confronting a worker.

Before you approach your coworker, carefully think about:

For example, do you want them to stop doing something? Are you looking for an apology? What is it that you want to gain from this encounter. If your goal is just to yell at them and make them feel bad, then perhaps you shouldn’t be confronting them, because it will not be a very constructive discussion.

Once again, there are so many different reasons why you may need to confront someone, but typically a confrontation is only necessary when someone has done something undesirable, whether intentionally or unintentionally. So even if you think the person is objectively wrong, put yourself in their shoes and remember that they have their own reasons for doing whatever it is that they did.

Remember not to talk too much. Don’t give long explanations. Be clear and concise, and give the other person an opportunity to respond.

People get defensive when they feel they’re being attacked. For a more constructive dialogue, choose your language very carefully, and be sure not to use accusatory statements. For example, instead of saying “You’re always showing up late,” you could say “I’ve noticed you’ve come in late a few days, and I understand that you have your reasons for that, but this how it affects me/this is why it’s a problem for me.” Instead of accusing them, focus on how their actions have affected you. This will hopefully prevent them from going into defensive mode, and give them a reason to be on your side.

Once again, this depends on why your confronting the person, but it’s important to keep in mind that your facts may be wrong, or the person you’re confronting may have some information that you were completely unaware of. This is why it’s so important to go into any confrontation humble and willing to listen.

Confrontation should never be about proving you’re right or shaming your coworker. The purpose of confronting a colleague should be to bring about resolution of some sort. If something is bothering you about a coworker’s actions, know that you have every right to approach him or her about it. Just be respectful, listen carefully, and know that you’re on the same team, because resolving conflict in the workplace benefits everyone.

I’ve joined a union, now what?
Are you the only woman on your team? Here’s what you should know

I've joined a union, now what?

Are you the only woman on your team? Here's what you should know