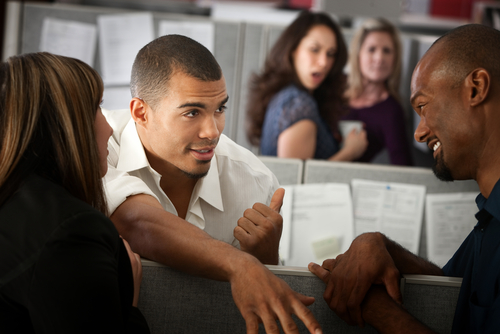 It may seem like a juvenile issue, but the truth is, gossip happens at all ages even within the most sophisticated organizations, and it’s not without its consequences. Workplace gossip can be a major contributor to a negative work environment, which can lead to higher stress both in and out of the workplace.

Being an advocate for workers’ rights means fighting to make your work a better place for both you and your colleagues. Here are some simple ways you can promote a healthy workplace in the midst of gossip.

This may sound ridiculously simple, and it is. It’s easy talk about others, but it can lead to a string of rumours and gossip. Next time you’re about to speak to a coworker about another coworker, take a second to stop and think about whether or not what you’re saying is positive and/or constructive.

If you hear something about a coworker, do your best not to spread the information any further. We get it, sometimes news can be too interesting not to share, but if you wouldn’t want someone spreading that information – true or false – about you, then don’t do it to someone else.

Once again, it’s so easy to get caught up in spreading negative talk, so try to start a culture of positivity by making it a point to say uplifting things about your coworkers when their not around. Just like negative talk, positive conversation can be contagious and can catch on quick.

Sometimes it’s not always appropriate to call someone out in a group for gossiping. So if gossip comes up, try to turn the conversation around. Change the subject, make a joke, or say something positive about the person in question. Do whatever you can to stop the negativity in its tracks.

In addition to creating an unhealthy work environment, gossip can often lead to the mistreatment of individuals in the workplace. It is so important to encourage a workplace culture of positivity and respect, and just because you don’t have a supervisor title, does not mean you can’t facilitate this change; that’s what being a workplace warrior is all about.

View all posts by James →
Constructive Dismissal: What it is and Why it Matters
Injured at work? These are your rights and responsibilities

Constructive Dismissal: What it is and Why it Matters

Injured at work? These are your rights and responsibilities