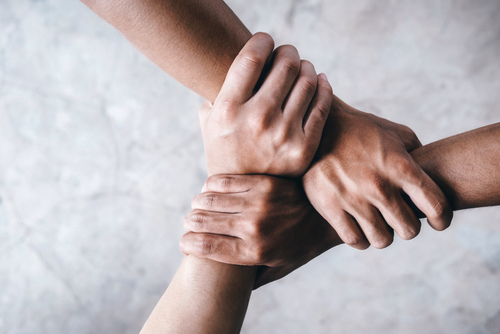 In case you didn’t already know, Teamsters 987 and Teamsters Canada are affiliated with the larger entity that is the International Brotherhood of Teamsters (IBT). Although ‘brotherhood’ is a somewhat dated term that unfortunately excludes women, its essence is for both our sisters and brothers. Brotherhood is a powerful idea that very much reflects our values as a union. At Teamsters 987, we believe there is strength in numbers and power in supporting one another, and that is what ‘brotherhood’ is all about.

The term ‘brotherhood’ reflects the fact that we are all connected in some way. We work to see change not just for our individual members, but for workers all over the world. We are one for all and all for one. This mentality not only fosters an environment of connectedness among your Teamsters brothers and sisters, but it affects the way we see all workers. So, why is ‘brotherhood’ important when it comes to unions?

It creates trust and support

‘Brotherhood’ speaks to a connectedness, support, and comradery. As brothers and sisters, we’re all in the same struggle, and we’re all readily available to lend a helping hand.

As Teamsters members, we have the privilege of knowing we’re never alone. We are not only supported by our local 987 community but are also a part of something much greater. We are all a part of a large community of workers who are committed to workplace fairness.

We’ve said it before, and we’ll say it again: there is strength in numbers. Not only that, but there is strength in unity. Teamsters look out for each other, we fight for one another, and we refuse to remain complacent because we know that we are fighting for more than just ourselves. This drive makes us a force to be reckoned with.

Teamsters 987 is not just a union, we’re a family. We support one another, protect one another, and work together to affect real, large-scale change. We will never stop taking all workplace issues seriously because a triumph for one of us is a triumph for all of us…and that’s the strength of the brotherhood.

Addiction treatment in the workplace

It's time to shine a light on workplace bullying