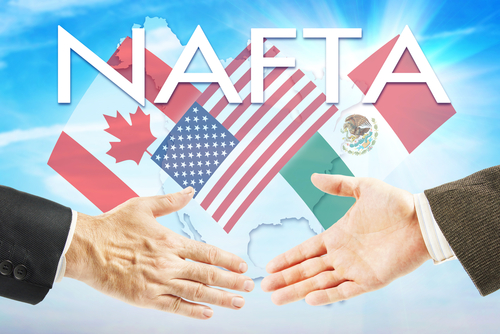 It’s been all over the news and, most likely, all over your social media newsfeeds for the past couple months. The renegotiation of NAFTA has been a hot topic across North America, and for good reason. It’s a big deal. We thought we’d provide an overview of what’s been going on during these talks.

Let’s start from the beginning, what are the NAFTA renegotiations?

The North American Free Trade Agreement (NAFTA) was created in 1994 and established the rules for trading goods and services between Canada, the United States, and Mexico.

Since being elected, the United States President, Donald Trump, has spoken against NAFTA, stating “We will renegotiate NAFTA or we will terminate NAFTA.” And thus began the first renegotiation of a 23-year-old agreement.

What does everyone want?

Through all the back and forth, we have learned a great deal about the values of each country involved in NAFTA, so here’s what each country is interested in when it comes to trade:

The United States is looking for stronger protection of U.S. property, and much stricter trade rules in order to ensure goods are sourced from within the U.S. Additionally, the U.S. wants to see higher labour standards in Mexico, which would then increase the cost of doing business there.

What Mexico wants is quite the opposite. Mexico is hoping for more access to U.S. and Canadian markets and the elimination of trade barriers. Additionally, Mexico is hoping to see more labour mobility and easier cross-border flow of goods.

And then there’s Canada. We truly believe that Canada has set the bar high with their proposal. Among many other things, Canada wants to see the new NAFTA expanded to include new chapters on labour standards, environmental standards, gender rights and indigenous rights. Canada also hopes to see easier travel across borders for business professionals. And thankfully, Canada is also committed to protecting our dairy and poultry supply-management systems.

Final decisions on the new NAFTA are hoped to be established by early 2018. And whatever the decisions are, we know they won’t be perfect. What we hope to see is North American leaders righting some past wrongs. We hope to see a modernized NAFTA that puts workers first. We want to see improved working conditions for each country involved and workers’ rights defended on a federal level.

View all posts by James →
Remembrance Day: Looking at Veteran Support in Canada
Parental leave in Alberta & Canada: A Comparison With the World

Parental leave in Alberta & Canada: A Comparison With the World