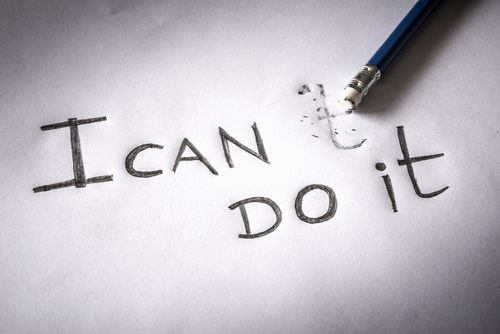 Most people fear failure, it’s a very common and very human fear to have. However, when that fear prevents you from moving forward in your career, realizing your potential, or generally excelling in your life, it may be time to take a closer look at how you can overcome it. Here are three simple tips for overcoming the fear of failure in and out of the workplace.

Most of us view failure almost as an ultimate destruction bringing our happy successful lives to a screeching halt. But it’s time we stop perceiving failure as destruction and start seeing it as what it is – an opportunity. Failure is 100% inevitable; at some point in our lives, we all will fail to meet expectations in one way or another, and there’s nothing wrong with that. What really matters is what you do with that failure and how you grow from it. In fact, failure is not only an opportunity but it is often a prerequisite for great achievements. Why? Because in order to grow or accomplish something great, you have to step outside of your comfort zone, a place with a lot of unknowns and often failures.

Fear is an all encompassing emotion that often clouds our ability to think about things rationally. If you have a strong fear of failure, take some time to really think about what you’re afraid of and talk to someone about it. For example, let’s say you were going to ask for a promotion, but were too afraid. Ask yourself or a friend ‘what’s really the worst thing that could happen?’ In many cases, the worst thing that will happen is you’ll be told no, your self esteem may take a hit, but that’s it.

As we said earlier, failure often takes place when we step outside our comfort zone, which is precisely why we have comfort zones in the first place. In order to rid yourself of the crippling fear of failure, practice doing things that scare you. Start small, for example, it might be as simple as asking a new coworker if they want to have lunch with you, or it may be something bigger like asking your supervisor if you can be a part of a team they’re putting together. Whatever it is, practice stepping outside of your comfort zone. The more you do it, the more you’ll realize that it’s really not that scary.

To some extent, we’re all afraid of failure, and that’s okay. But it’s important to remember that failure isn’t bad; it’s a learning opportunity, it is absolutely inevitable, and it’s often an indicator that you’re on the verge of something great. Conquer your fear of failure in or out of the workplace with these three simple steps.

View all posts by James →
5 tips for holiday shopping on a budget
Not doing the job you signed up for?

5 tips for holiday shopping on a budget

Not doing the job you signed up for?